The NCERT Solution for Class 11 Biology Chapter 13 Photosynthesis of Higher Plants includes answers to every question from the NCERT textbook’s exercise. Top students love SWC NCERT Solutions because they are very effective. In general, Class 11 is regarded as the most significant year in a student’s professional development. The NCERT answers for class 11 Biology were created with the goal of providing students with the most help possible.

1. By looking at a plant externally can you tell whether a plant is C3 or C4 ? Why and how?

Sol. It is not possible to distinguish externally between a C3 and C4 plant, but generally tropical plants are adapted for C4  cycle.

2. By looking at which internal structure of a plant can you tell whether a plant is C3 or C4 ? Explain.

Sol. C4  plants live in hot moist or arid and nonsaline or saline habitats. Internally the leaves show kranz anatomy. In kranz anatomy, the mesophyll is undifferentiated and its cells occur in concentric layers around vascular bundles. Vascular bundles are surrounded by large sized bundle sheath cells which are arranged in a wreath-like manner (kranz – wreath). The mesophyll and bundle sheath cells are connected by plasmodesmata or cytoplasmic bridges. The chloroplasts of the mesophyll cells are smaller. They have well developed grana and a peripheral reticulum but no starch. Mesophyll cells are specialised to perform light reaction, evolve 02 and produce assimilatory power (ATP and NADPH). They also possess enzyme PEPcase for initial fixation of CO2 The chloroplasts of the bundle sheath cells are agranal.

3. Even though a very few cells in a C4  plant carry out the biosynthetic – Calvin pathway, yet they are highly productive. Can you discuss why?

Sol. Since, through C4  cycle, a plant can photosynthesise even in presence of very low concentration of CO2 (upto 10 parts per million), the partial closure of stomata due to xeric conditions would not bring much

effect. Therefore, the plants can adapt to grow at low water content, high temperature and bright light intensities. This cycle is specially suited to such plants which grow in dry climates of tropics and subtropics. Besides, the photosynthetic rate remains higher due to absence of photorespiration in these plants. It can be visualised that both C4  cycle and photorespiration are the result of evolution or might have been one of the reasons of evolution for the adaptation of plants to different environments. C4  plants are about twice to efficient as C3 plants in converting solar energy into production of dry matter.

4. RuBisCO is an enzyme that acts both as a carboxylase and oxygenase. Why do you think RuBisCO carries out more carboxylation in C4  plants?

Sol. RuBisCO is an enzyme which acts both as carboxylase (carboxylation during photosynthesis) and oxygenase (during photorespiration). But RuBisCO carries out more carboxylation in C4 plants. In C4  plants, initial fixation of carbon dioxide occurs in mesophyll cells. The primary acceptor of C02 is phosphoenol pyruvate or PER It combines with carbon dioxide in the presence of PEP carboxylase or PEPcase to form oxaloacetic acid or oxaloacetate. Malic acid or aspartic acid is translocated to bundle sheath cells through plasmodesmata. Inside the bundle sheath cells they are decarboxylated (and deaminated in case of aspartic acid) to form pyruvate and CO2 . CO2 is again fixed inside the bundle sheath Cells through Calvin cycle. RuBP of Calvin cycle is called secondary or final acceptor of CO2 in C4  plants. Pyruvate is sent back to mesophyll cells.

5. Suppose there were plants that had a high concentration of chlorophyll b, but lacked chlorophyll a, would it carry out photosynthesis? Then why do plants have chlorophyll b and other accessory pigments?

Sol. Plants that do not possess chlorophyll a will not carry out photosynthesis because it is the primary pigment and act as the reaction centre. It performs the primary reactions of photosynthesis or conversion of light into chemical or electrical energy. Other photosynthetic pigments are called accessory pigments. They absorb light energy of different wavelengths and hence broaden the spectrum of light absorbed by photosynthetic pigments. These pigments hand over the absorbed energy to chlorophylla.

6. Give comparison between the following:

(b) Cyclic and non-cydic photophosphorylation

Sol. (a) The differences between C3 and C4 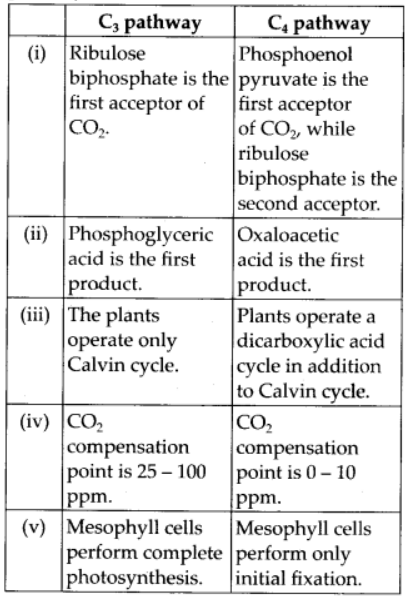 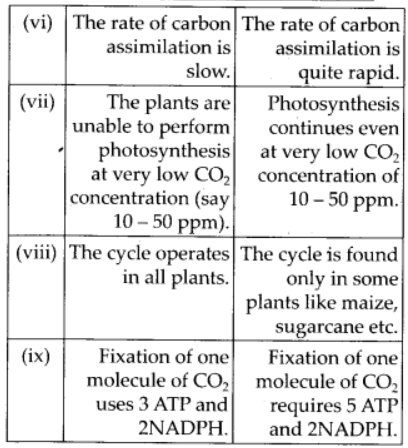 (b) The differences between cyclic and non- cyclic photophosphorylation are as follows :

(c) Differences between the leaf anatomy of C3 and C4plants are as follows : 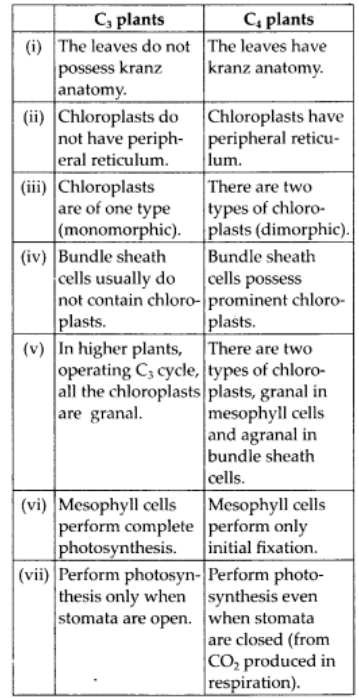 7. Look at leaves of the same plant on the shady side and compare it with the leaves on the sunny side. Or ompare the potted plants kept in the sunlight with those in the shade. Which of them has leaves that are darker green? Why?

Sol. The leaves of the shaded side are darker green than those kept in sunlight due to two reasons:

(i) The chloroplasts occur mostly in the mesophyll cells along their walls for receiving optimum quantity of incident light.

(ii)The chloroplasts align themselves in vertical position along the lateral walls of high light intensity and along tangential wails in moderate light.

8. The given figure shows the effect of light on the rate of photosynthesis. Based on the graph, answer the following questions. 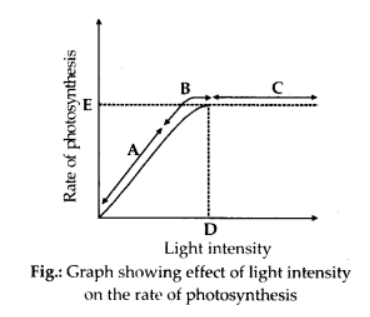 (a) At which point/s (A, B or C) in the curve is light limiting factor?

(b) What could be the limiting factor/s in region A?

(c) What do C and D represent on the curve?

Sol. (a) At regions A and B light is the limiting factor.

(b) In the region A’, light can be a limiting factor.

(c) C is the region where the rate of photosynthesis is not increased when light intensity is increased. D is the point where some other factors become limiting.

9. Why is the colour of a leaf kept in the dark frequently becomes yellow, or pale green? Which pigment do you think is more stable?

Sol. Carotenoid pigments are found in all photosynthetic cells. They are accessory pigments also found in roots, petals etc. These pigments do not breakdown easily thus temporarily reveal their colour due to unmasking, following breakdown of chlorophylls. Thus the colour of leaf kept in dark is yellow or pale green.

An academic team of knowledgeable members of SWC has produced and published the NCERT Solutions for class 11’s biology chapter for your use as a reference. You can get answers to all of the chapters of the NCERT Biology class 11 here at SWC. Please make use of the following NCERT answers that were created by SWC as a reference for this chapter. In addition to that, study the chapter’s theory before attempting to solve the NCERT problems.