The NCERT Solution For Class 11 Biology Chapter 8 Cell: The Unit of Life includes answers to every question from the NCERT textbook’s exercise. Top students love SWC NCERT Solutions because they are very effective. In general, Class 11 is regarded as the most significant year in a student’s professional development. The NCERT answers for class 11 Biology were created with the goal of providing students with the most help possible.

1. Which of the following is not correct?
(a) Robert Brown discovered the cell.
(b) Schleiden and Schwann formulated the cell theory.
(c) Virchow explained that cells are formed from pre-existing cells.
(d) A unicellular organism carries out its life activities within a single cell.
Answer. (a)

4. Which of the following is correct?
(a) Cells of all living organisms have a nucleus.
(b) Both animal and plant cells have a well defined cell wall.
(c) In prokaryotes, there are no membrane bound organelles.
(d) Cells are formed de novo from abio

5. What is a mesosome in a prokaryotic cell? Mention the functions that it performs.
Answer. Mesosome is a membranous structure in prokaryotic cell, which is made by the extensions of the plasma membrane into the cell in form of vesicles, tubules and lamellae. Mesosomes are equal to mitochondria in eukaryotes, as they perform aerobic cellular respiration in prokaryotes. It helps in DNA replication and distribution of genetic material to daughter cells. Mesosomes also help in respiration, increase the surface area of the plasma membrane and enzymatic content and cell wall formation.

7. Name two cell-organelles that are double membrane bound. What are the characteristics of these two organelles? State their functions and draw labelled diagrams of both?
Answer. Mitochondria and chloroplast are double membrane bound organelles. Mitochondria: Mitochondria are cylindrical or sausage shaped cell organelles and contains two membranes, outer and inner. The inner compartment is called the matrix containing DNA, RNA, ribosomes, enzymes of Krebs cycle etc and outer membrane forms the continuous limiting boundary of the organelle. Inner membrane forms number of infoldings called the cristae which increases the surface area. Oxysomes are present on inner mitochondrial membrane. Mitochondria are semiautonomous organelles, i.e., have their own DNA and ribosomes. 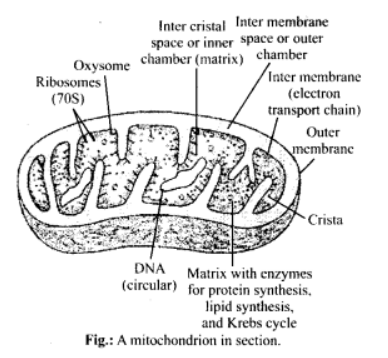 • Mitochondria are important for aerobic respiration.

• Mitochondria regulate the calcium ion concentration in the cell.

• Mitochondrial matrix contains enzymes for the synthesis of fatty acids.

• Here, many amino acids can be synthesized

Chloroplast: They are green coloured plastids which are disc shaped. The space limited by inner membrane of chloroplast is called as stroma. Stroma has organised flattened membranous sacs called the thylakoids. Thylakoids are arranged in stacks called grana. Matrix of a chloroplast contains DNA, RNA, ribosomes and enzymes. Chloroplast is also a semiautonomous organelle. 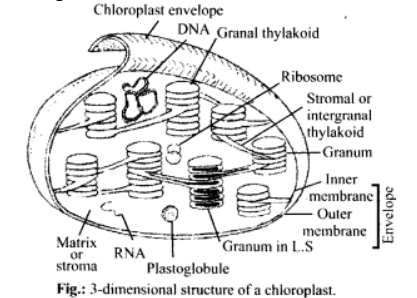 1. Photosynthesis is performed by chloroplast.

3. Maintains balance of C02 concentration in the air.

4. Keeps oxygen balance constant in atmosphere by liberating 02 into the atmosphere, used during respiration and combustion.

• The prokaryotic cell is essentially a single – envelope system.

• DNA is naked and lies coiled in cytoplasm. It is not covered by nuclear membrane and is termed as nucleoid.

• Cell wall is present in bacteria and cyanobacteria, but absent in mycoplasma.

10. Cell is the basic unit of life. Discuss in brief.
Answer.Cell is fundamental, structural and functional unit of life, as no living organism can have life without being cellular. All life begins as a single cell. An organism is either made of single cell (unicellular) or many cells (multicellular). In unicellular organism, single cell is capable of independent existence and perform all essential functions of life, while in multicellular organism, each group of cells is specialised for specific function. Life passes from one generation to the next in form of cells, and new cell always arise from division of pre-existing cells. Cells are totipotent, i.e., single cell has ability to form whole organism. The activities of an organism are sum total of activities of its cells, therefore, cell is the basic unit of life.

11. What are nuclear pores? State their function.
Answer. Nuclear envelope bounds the nucleus from outside and separates it from cytoplasm. It consists of two membranes, with outer membrane continuous with endoplasmic reticulum. The nuclear envelope is interrupted by minute nuclear pores, at a number of places, which are produced by the fusion of its two membranes. These
nuclear pores are the passages through which movement of RNA and protein molecules takes place in both directions between the nucleus and the cytoplasm.

12. Both lysosomes and vacuoles are endomem-brane ‘structures, yet they differ in terms of their functions. Comment.
Answer. Organelles of endomembrane system such as lysosome and vacuoles function in close coordination with one another but are specialised to perform different functions. Lysosomes breakdown the ageing and dead cells, they help in digestion of food as they contain hydrolytic digestive enzymes. They are involved in cell division also. Vacuoles on other hand, help in excretion and osmoregulation in Amoeba (contractile vacuole) or provides buoyancy, mechanical strength in prokaryotes (air vacuoles).

13.Describe the structure of the following withthe help of labelled diagrams.
(i) Nucleus (ii) Centrosome
Answer. (i) Nucleus: Nucleus is double membrane bound principle cell organelle which contains all genetic information for controlling cellular metabolism and transmission of genetic information.
Nucleus is differentiated into following four parts:
(a) Nuclear envelope: It is a double membrane bound envelope that surround the nucleus and separates the latter from the cytoplasm.
(b) Nucleoplasm: Itis clear, non-staining, fluid material present in the nucleus, which contains raw materials (nucleotides), enzymes (DNA/RNA polymerases) and metal ions for the synthesis of RNAs and DNA. The nuclear matrix or the nucleoplasm is composed of nucleolus and chromatin.
(c) Nucleolus: It is a naked, round and slightly irregular structure, which is attached to the chromatin at a specific region. It is a site for active ribosomal RNA synthesis.
(d) Chromatin : It has the ability to get stained with certain basic dyes. It is known to be the hereditary DNA protein fibrillar complex. The chromatin fibres are distributed throughout the nucleoplasm.

(ii) Centrosome: Centrosome is an organelle usually containing two cylindrical structures called centrioles. They are surrounded by amorphous pericentriolar materials. Both the centrioles in a centrosome lie perpendicular to each other. They are made up of nine evenly spaced peripheral fibrils of tubulin protein. Each of the peripheral fibril is a triplet. The adjacent triplets are also linked. The hub of centriole is connected with tubules of the peripheral triplets by radial spokes made of protein. 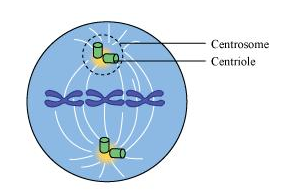 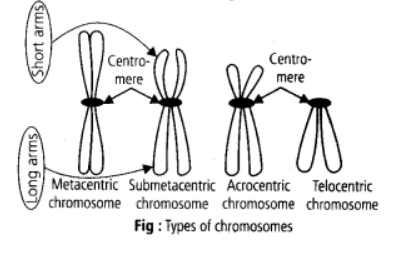 Conclusions for NCERT Solution For Class 11 Biology Chapter 8 Cell: The Unit of Life

An academic team of knowledgeable members of SWC has produced and published the NCERT Solutions for class 11’s Hindi chapter for your use as a reference. You can get answers to all of the chapters of the NCERT Biology class 11 here at SWC. Please make use of the following NCERT answers that were created by SWC as a reference for this chapter. In addition to that, study the chapter’s theory before attempting to solve the NCERT problems.