The NCERT Solution for Class 11 Chemistry includes answers to every question from the NCERT text book’s exercise. Top students love SWC NCERT Solutions because they are very effective. In general, Class 11 is regarded as the most significant year in a student’s professional development. The NCERT answers for class 11 Chemistry were created with the goal of providing students with the most help possible.

Chapter-12 Some Basics Principles and Techniques

(v) C6H6
All the 6 carbon atoms in benzene are sp2 hybridised.

There are six C-C sigma bonds , six C-H bonds ,
and three C=C resonating bonds in the given compound.

There are six C-C sigma bonds , twelve C-H bonds sigma in the given compound.

There are two C-H sigma bonds , two C-Cl bonds sigma in the given compound.

There are two C-C sigma bonds , four C-H bonds and two
C=C π bonds in the given compound.

3. What are the bond line formulas for the following compounds?
(a)2, 3–dimethyl butanal
(b) Heptan–4–one
(c) Isopropyl alcohol 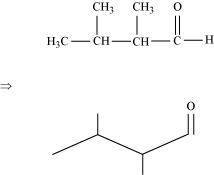 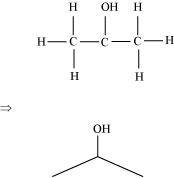 4. Give the IUPAC names of the following compounds:
(a)

6. What are the formulas for the first five members of each of the homologous series beginning with the below-given compounds?
(a) H– COOH
(b) CH3 COCH3
(c) H– CH = CH2

8. What are the functional groups present in the below given compounds?
(a)

9. Which of the two given compounds: O2 NCH2 CH2O– or CH3 CH2O– would you expect to be more stable and why?

The sigma electrons of the C-H bond get delocalized due to hyperconjugation. The alkyl is attached directly to an unsaturated system. The delocalization happens due to the partial overlap of a sp3-s sigma bond orbital with an empty p orbital of the n bond of an adjacent carbon atom.

This process can be shown as: 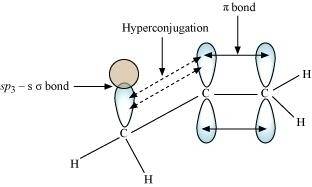 This type of overlap leads to a delocalisation (also known as no-bond resonance) of the π electrons, making the molecule more stable.

The resonating structures of the given compound are represented as:

Carbocations), Neutral molecules( due to the presence of a lone pair).

15. Are the below given sets of compounds related to each other? If so, are they geometrical or structural isomers or resonance contributors?
(a)

(b) Compounds having the same molecular formula, the same constitution, and the sequence of covalent bonds, but with different relative position of their atoms in space are called geometrical isomers.

In structures I and II, the relative position of Deuterium (D) and hydrogen (H) in space are different. Hence, the given pairs represent geometrical isomers.

(c) The given structures are canonical structures or contributing structures. They are hypothetical and individually do not represent any real molecule. Hence, the given pair represents resonance structures, called resonance isomers.

16. For each of the below given bond cleavages, show the electron flow by using curved arrows and classify them as heterolysisor homolysis. Classify the intermediate produced as carbocation or free radical or carbanion.
(a)

Answer:
(a) The bond cleavage using curved-arrows to show the electron flow of the given reaction can be represented as

It is an example of homolytic cleavage as one of the shared pair in a covalent bond goes with the bonded atom. The reaction intermediate formed is a free radical.

It is an example of heterolytic cleavage as the bond breaks in such a manner that the shared pair of electrons remains with the carbon of propanone. The reaction intermediate formed is carbanion.

It is an example of heterolytic cleavage as the bond breaks in such a manner that the shared pair of electrons remains with the bromine ion. The reaction intermediate formed is a carbocation.

It is a heterolytic cleavage as the bond breaks in such a manner that the shared pair of electrons remains with one of the fragments. The intermediate formed is a carbocation.

17. Define the terms Electromeric and Inductive effects. Which effect of electron displacement do you think can explain the below given correct orders of acidity of the carboxylic acids?
(a) Cl3C COOH > Cl2CH COOH > ClCH2 COOH
(b) CH3CH2 COOH > (CH3)2 CH COOH > (CH3)3C. COOH

Answer:
Inductive effect
The permanent displacement of sigma (σ) electrons along a saturated chain, whenever an electron withdrawing or electron donating group is present, is called inductive effect.

Inductive effect could be + I effect or – I effect. When an atom or group attracts electrons towards itself more strongly than hydrogen, it is said to possess – I effect. For example,

When an atom or group attracts electrons towards itself less strongly than hydrogen, it is said to possess + I effect. For example,

Electrometric effect
It involves the complete transfer of the shared pair of π electrons to either of the two atoms linked by multiple bonds in the presence of an attacking agent. For example,

Electrometric effect could be + E effect or – E effect.

(a)Cl3C COOH > Cl2CH COOH > ClCH2COOH
The order of acidity can be explained on the basis of Inductive effect (– I effect). As the number of chlorine atoms increases, the – I effect increases. With the increase in – I effect, the acid strength also increases accordingly.

(b)CH3 CH2 COOH > (CH3)2 CHCOOH > (CH3)3 C.COOH
The order of acidity can be explained on the basis of inductive effect (+ I effect). As the number of alkyl groups increases, the + I effect also increases. With the increase in + I effect, the acid strength also increases accordingly.

18. Explain the following techniques with the help of examples.
(a)Distillation
(b) Crystallisation
(c) Chromatography

Answer:
(a) Crystallisation
Crystallization is used to purify solid organic compounds.
Principle: The principle on which it works is the difference in the solubility of the compound and impurities in a given solvent. The impure compound is made to dissolve in the solvent at a higher temperature since it is sparingly soluble at lower temperatures. This is continued till we get an almost saturated solution. On cooling and filtering it, we get its’ crystals. Ex: By crystallizing 2-4g of crude aspirin in 20mL of ethyl alcohol, we get pure aspirin. It is heated if needed and left undisturbed until it crystallizes. The crystals are then separated and dried.

(b) Distillation
This method is used to separate non-volatile liquids from volatile impurities. It is also used when the components have a considerable difference in their boiling points.
Principle: The principle on which it works is that liquids having different boiling points vaporise at different temperatures. They are then cooled and the formed liquids are separated.
Ex: A mixture of aniline (b.p = 457 K) and chloroform (b.p = 334 K) is taken in a round bottom flask having a condenser. When they are heated, Chloroform, vaporizes first due to its high volatility and made to pass through a condenser where it cools down. The aniline is left behind in the round bottom flask.

(c) Chromatography
It is widely used for the separation and purification of organic compounds.
Principle: The principle on which it works is that individual components of a mixture move at different paces through the stationary phase under the influence of mobile phase.
Ex: Chromatography can be used to separate a mixture of blue and red ink. This mixture is placed on chromatogram where the component which is less absorbed by the chromatogram moves faster up the paper than the other component which is almost stationary.

19. Describe the method, which can be used to separate two compounds with different solubilities in a solvent S.

Answer: Fractional crystallisation is the method used for separating two compounds with different solubilities in a solvent S. The process of fractional crystallisation is carried out in four steps.
(a) Preparation of the solution: The powdered mixture is taken in a flask and the solvent is added to it slowly and stirred simultaneously. The solvent is added till the solute is just dissolved in the solvent. This saturated solution is then heated.
(b) Filtration of the solution: The hot saturated solution is then filtered through a filter paper in a China dish.
(c) Fractional crystallisation: The solution in the China dish is now allowed to cool. The less soluble compound crystallises first, while the more soluble compound remains in the solution. After separating these crystals from the mother liquor, the latter is concentrated once again. The hot solution is allowed to cool and consequently, the crystals of the more soluble compound are obtained.
(d) Isolation and drying: These crystals are separated from the mother liquor by filtration. Finally, the crystals are dried.

20. Discuss the chemistry of Lassaigne’s test.

The cyanide, sulphide, and halide of sodium formed are extracted from the fused mass by boiling it in distilled water. The extract so obtained is called Lassaigne’s extract. This Lassaigne’s extract is then tested for the presence of nitrogen, sulphur, halogens, and phosphorous.

Chemistry of the test
In the Lassaigne’s test for nitrogen in an organic compound, the sodium fusion extract is boiled with iron (II) sulphate and then acidified with sulphuric acid. In the process, sodium cyanide first reacts with iron (II) sulphate and forms sodium hexacyanoferrate (II). Then, on heating with sulphuric acid, some iron (II) gets oxidised to form iron (III) hexacyanoferrate (II), which is Prussian blue in colour. The chemical equations involved in the reaction can be represented as

Chemistry of the test
In the Lassaigne’s test for sulphur in an organic compound, the sodium fusion extract is acidified with acetic acid and then lead acetate is added to it. The precipitation of lead sulphide, which is black in colour, indicates the presence of sulphur in the compound.

Chemistry of the test
The sodium fusion extract is treated with sodium nitroprusside. Appearance of violet colour also indicates the presence of sulphur in the compound.

If in an organic compound, both nitrogen and sulphur are present, then instead of NaCN, formation of NaSCN takes place.

This NaSCN (sodium thiocyanate) gives a blood red colour. Prussian colour is not formed due to the absence of free cyanide ions. 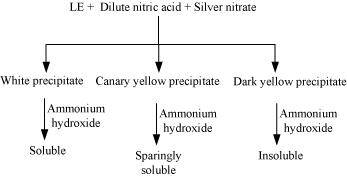 Chemistry of the test
In the Lassaigne’s test for halogens in an organic compound, the sodium fusion extract is acidified with nitric acid and then treated with silver nitrate.