The NCERT Solution for Class 11  physics includes answers to every question from the NCERT textbook’s exercise. Top students love SWC NCERT Solutions because they are very effective. In general, Class 11 is regarded as the most significant year in a student’s professional development. The NCERT answers for class 11  physics were created with the goal of providing students with the most help possible.

Answers to the class 11  physics questions provided in the exercise might be challenging for students for a number of reasons. One should not omit any NCERT textbook content in order to get the highest possible grade. Use the Swastik Classes’ NCERT answers for  physics class 11 as a resource. Important exam-based questions are covered in depth in each chapter.

Chapter-4 Motion In A Plane

Question1. State, for each of the following physical quantities, if it is a scalar or a vector:
volume, mass, speed, acceleration, density, number of moles, velocity, angular frequency, displacement, angular velocity.

Solution :
a. True; because magnitude is a pure number.
b. False, each component of a vector is also a vector.
c. True, only if the particle moves along a straight line in the same direction, if not then it is false.
d. True, because the total path length is either greater than or equal to the magnitude of the displacement vector.
e. True, as they can not be represented by the three sides of a triangle taken in the same order.

be represented by the adjacent sides of a parallelogram OMNP, as shown in the given figure. 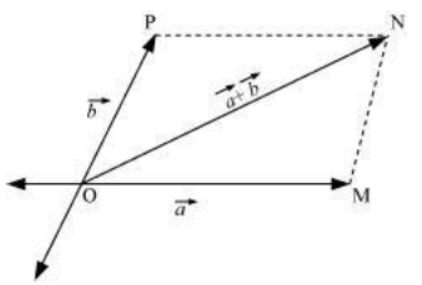 Here, we can write:

In a triangle, each side is smaller than the sum of the other two sides.
Therefore, in ΔOMN, we have:

If the two vectors

act along a straight line in the same direction, then we can write:

be represented by the adjacent sides of a parallelogram OMNP, as shown in the given figure.

In a triangle, each side is smaller than the sum of the other two sides.

Therefore, in ΔOMN, we have:

If the two vectors

act along a straight line in the opposite direction, then we can write:

be represented by the adjacent sides of a parallelogram PORS, as shown in the given figure. 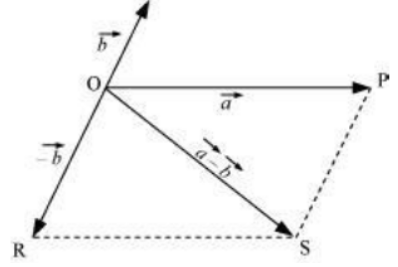 In a triangle, each side is smaller than the sum of the other two sides. Therefore, in ΔOPS, we have:
PR < PS + SR

If the two vectors act in a straight line but in opposite directions, then we can write:

be represented by the adjacent sides of a parallelogram PORS, as shown in the given figure. 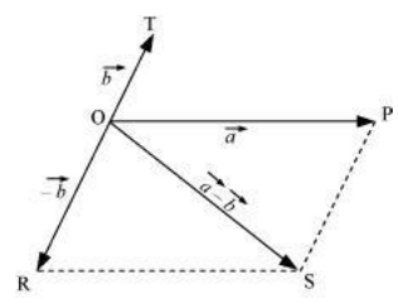 The following relations can be written for the given parallelogram.

The quantity on the LHS is always positive and that on the RHS can be positive or negative. To make both quantities positive, we take modulus on both sides as:

If the two vectors act in a straight line but in the same directions, then we can write:

Solution :
a. In order to make vectors a + b + c + d = 0, it is not necessary to have all the four given vectors to be null vectors. There are many other combinations which can give the sum zero.
b. Correct

Question8. Three girls skating on a circular ice ground of radius 200 m start from a point Pon the edge of the ground and reach a point Qdiametrically opposite to Pfollowing different paths as shown in Fig. 4.20. What is the magnitude of the displacement vector for each? For which girl is this equal to the actual length of the path skated?

Question9. A cyclist starts from the centre Oof a circular park of radius 1 km, reaches the edge Pof the park, then cycles along the circumference, and returns to the centre along QO as shown in Fig. 4.21. If the round trip takes 10 min, what is the

a. net displacement,
b. average velocity, and
c. average speed of the cyclist?

Solution :
a. Displacement is given by the minimum distance between the initial and final positions of a body. In the given case, the cyclist comes to the starting point after cycling for 10 minutes. Hence, his net displacement is zero.

Question10. On an open ground, a motorist follows a track that turns to his left by an angle of 60° after every 500 m. Starting from a given turn, specify the displacement of the motorist at the third, sixth and eighth turn. Compare the magnitude of the displacement with the total path length covered by the motorist in each case.

The path followed by the motorist is a regular hexagon with side 500 m, as shown in the given figure

Question11. A passenger arriving in a new town wishes to go from the station to a hotel located 10 km away on a straight road from the station. A dishonest cabman takes him along a circuitous path 23 km long and reaches the hotel in 28 min. What is (a) the average speed of the taxi, (b) the magnitude of average velocity? Are the two equal?

Solution :
The described situation is shown in the given figure. 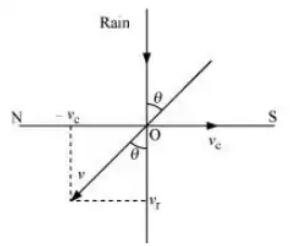 Question13. A man can swim with a speed of 4.0 km/h in still water. How long does he take to cross a river 1.0 km wide if the river flows steadily at 3.0 km/h and he makes his strokes normal to the river current? How far down the river does he go when he reaches the other bank? 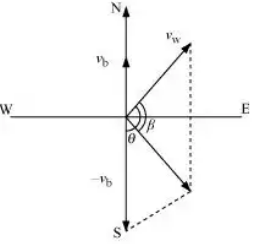 Question15. The ceiling of a long hall is 25 m high. What is the maximum horizontal distance that a ball thrown with a speed of 40 m s-1 can go without hitting the ceiling of the hall ?

Question16. A cricketer can throw a ball to a maximum horizontal distance of 100 m. How much high above the ground can the cricketer throw the same ball ?

Question17. A stone tied to the end of a string 80 cm long is whirled in a horizontal circle with a constant speed. If the stone makes 14 revolutions in 25 s, what is the magnitude and direction of acceleration of the stone?

Question18. An aircraft executes a horizontal loop of radius 1.00 km with a steady speed of 900 km/h. Compare its centripetal acceleration with the acceleration due to gravity.

Question20. The position of a particle is given by

where t is in seconds and the coefficients have the proper units for r to be in metres.
a. Find the v and a of the particle?

b. What is the magnitude and direction of velocity of the particle at t = 2.0 s ?

The position of the particle is given by:

Velocity v, of the particle is given as:

Acceleration a, of the particle is given as:

The magnitude of velocity is given by:

The negative sign indicates that the direction of velocity is below the x-axis. 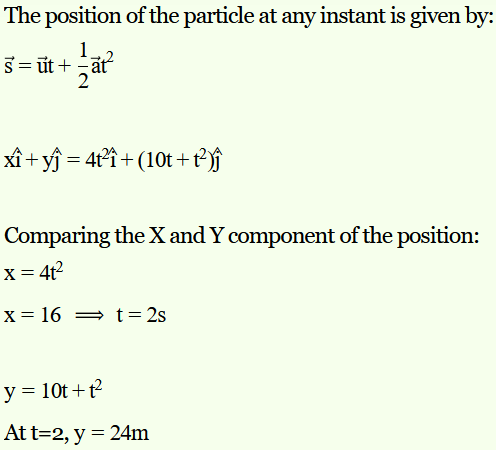 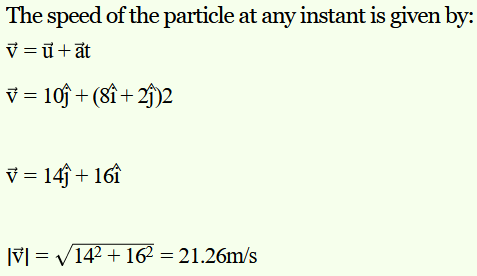 Question22. î and ĵ are unit vectors along x and y axis respectively. What is the magnitude and direction of the vectors î + ĵ, and î − ĵ ? What are the components of a vector A= 2î + 3ĵ along the directions of î + ĵ and î − ĵ? [You may use graphical method] 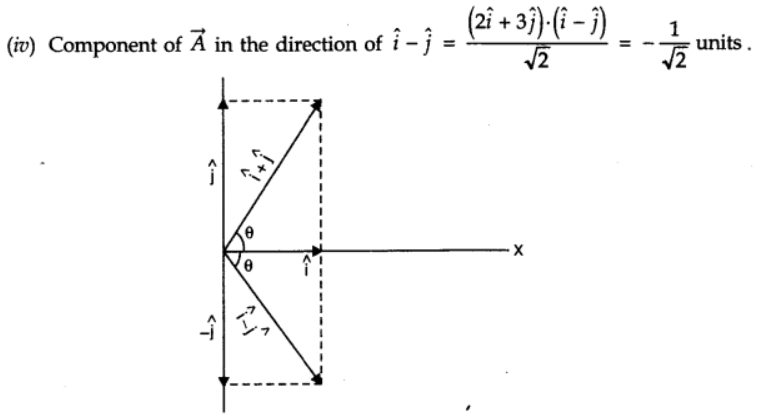 Question24. Read each statement below carefully and state, with reasons and examples, if it is true or false :
A scalar quantity is one that
a. is conserved in a process
b.can never take negative values
c. must be dimensionless
d. does not vary from one point to another in space
e. has the same value for observers with different orientations of axes.

Solution :
a.False
Despite being a scalar quantity, energy is not conserved in inelastic collisions.

b. False
Despite being a scalar quantity, temperature can take negative values.

c. False
Total path length is a scalar quantity. Yet it has the dimension of length.

d.False
A scalar quantity such as gravitational potential can vary from one point to another in space.

e. True
The value of a scalar does not vary for observers with different orientations of axes.

Question25. An aircraft is flying at a height of 3400 m above the ground. If the angle subtended at a ground observation point by the aircraft positions 10.0 s apart is 30°, what is the speed of the aircraft ?

Solution :
The positions of the observer and the aircraft are shown in the given figure.

Question26. A vector has magnitude and direction. Does it have a location in space ? Can it vary with time ? Will two equal vectors a and b at different locations in space necessarily have identical physical effects ? Give examples in support of your answer.

Solution :
(i) A vector in general has no definite location in space because a vector remains unaffected whenever it is displaced anywhere in space provided its magnitude and direction do not change. However, a position vector has a definite location in space.
(ii) A vector can vary with time as example the velocity vector o an unaffected particle varies with time.
(iii) Two equal vectors at different locations in space do not necessarily have same physical effects. For example, two equal forces acting at two different points on a body which can cause the rotation of a body about an axis will not produce equal turning effect.

Question28. Can you associate vectors with (a) the length of a wire bent into a loop, (b) a plane area, (c) a sphere ? Explain.

Solution :
(a) No, one cannot associate a vector with the length of a wire bent into a loop.

Question29. A bullet fired at an angle of 30° with the horizontal hits the ground 3.0 km away. By adjusting its angle of projection, can one hope to hit a target 5.0 km away? Assume the muzzle speed to the fixed, and neglect air resistance.

Question30. A fighter plane flying horizontally at an altitude of 1.5 km with speed 720 km/h passes directly overhead an anti-aircraft gun. At what angle from the vertical should the gun be fired for the shell with muzzle speed 600 m s-1 to hit the plane ? At what minimum altitude should the pilot fly the plane to avoid being hit ? (Take g = 10 m s-2 ).

Question31. A cyclist is riding with a speed of 27 km/h. As he approaches a circular turn on the road of radius 80 m, he applies brakes and reduces his speed at the constant rate of 0.50 m/s every second. What is the magnitude and direction of the net acceleration of the cyclist on the circular turn ?

Suppose the cyclist begins cycling from point P and moves toward point Q. At point Q, he applies the breaks and decelerates the speed of the bicycle by 0.5 m/s2.

Question32.a. Show that for a projectile the angle between the velocity and the x-axis as a function of time is given by
θ(t) = tan-1((v0y –  gt) / v0x)
b. Shows that the projection angle θ0 for a projectile launched from the origin is given by
θ0 = tan-1(4hm / R)
where the symbols have their usual meaning.

An academic team of knowledgeable members of SWC has produced and published the NCERT Solutions for class 11’s  physics chapter for your use as a reference. You can get answers to all of the chapters of the NCERT  physics class 11 here at SWC. Please make use of the following NCERT answers that were created by SWC as a reference for this chapter. In addition to that, study the chapter’s theory before attempting to solve the NCERT problems.