Question 1. In quadrilateral ABCD (See figure). AC = AD and AB bisects A. Show that ABC ABD. What can you say about BC and BD?

Solution:
Given: In quadrilateral ABCD, AC = AD and AB bisects

Question 2. ABCD is a quadrilateral in which AD = BC and DAB = CBA. (See figure). Prove that:

Question 3. AD and BC are equal perpendiculars to a line segment AB. Show that CD bisects AB (See figure)

Solution:
AC being a transversal. [Given]

And AC being a transversal. [Given]

Question 5. Line is the bisector of the angle A and B is any point on  BP and BQ are perpendiculars from B to the arms of A. Show that:

(ii) BP = BQ or P is equidistant from the arms of

B is equidistant from the arms of

DAC on both sides, we get

Question 7. AB is a line segment and P is the mid-point. D and E are points on the same side of AB such that BAD = ABE and EPA = DPB. Show that:

EPD on both sides, we get

Question 8. In right triangle ABC, right angled at C, M is the mid-point of hypotenuse AB. C is joined to M and produced to a point D such that DM = CM. Point D is joined to point B. (See figure)

DBC is a right angle.

(ii) For two lines AC and DB and transversal DC, we have,

Now for parallel lines AC and DB and for transversal BC.

DBC is a right angle.

Solution:
i) in ∆ABC, we have
AB = AC [Given]
∴∠ABC = ∠ACB [Angles opposite to equal sides of a A are equal]

Question 2. In ∆ABC, AD is the perpendicular bisector of BC (see figure). Show that ∆ ABC is an isosceles triangle in which AB = AC.

Question 3. ABC is an isosceles triangle in which altitudes BE and CF are drawn to equal sides AC and AB respectively (see figure). Show that these altitudes are equal. 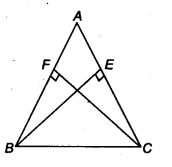 Question 4. ABC is a triangle in which altitudes BE and CF to sides AC and AB are equal (see figure). 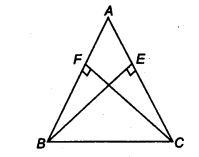 Question 5. ABC and DBC are isosceles triangles on the same base BC (see figure). Show that ∠ABD = ∠ACD. 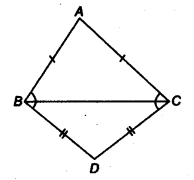 Question 6. ∆ABC is an isosceles triangle in which AB = AC. Side BA is produced to D such that AD = AB (see figure). Show that ∠BCD is a right angle. 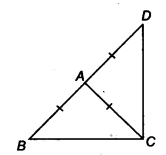 Solution:
In ∆ABC, we have AB = AC [Given]
∴Their opposite angles are equal.

Question 8. Show that the angles of an equilateral triangle are 60° each.

Solution:
In ∆ABC, we have

Question 1. ABC and DBC are two isosceles triangles on the same base BC and vertices A and D are on the same side of BC (See figure). If AD is extended to intersect BC at P, show that:

(iv) AP is the perpendicular bisector of BC.

Solution:
(i)ABC is an isosceles triangle.

DBC is an isosceles triangle.

Now in ABD and ACD,

From eq. (v), we have BP PC and from (vii), we have proved AP B. So, collectively AP is perpendicular bisector of BC.

Question 2. AD is an altitude of an isosceles triangle ABC in which AB = AC. Show that:

Solution:
In ABD and ACD,

Question 3. Two sides AB and BC and median AM of one triangle ABC are respectively equal to sides PQ and OR and median PN of ∆PQR (see figure). Show that
(i) ∆ABC ≅∆PQR
(ii) ∆ABM ≅∆PQN

Question 4. BE and CF are two equal altitudes of a triangle ABC. Using RHS congruence rule, prove that the triangle ABC is isosceles.

Solution:
Since BE ⊥AC [Given]

Solution:
We have, AP ⊥BC [Given]

Question 1. Show that in a right angled triangle, the hypotenuse is the longest side.

Question 4. AB and CD are respectively the smallest and longest sides of a quadrilateral ABCD (see figure). Show that ∠A > ∠C and ∠B >∠D.

Question 6. Show that of all line segments drawn from a given point not on it, the perpendicular line segment is the shortest.
Solution:
Let us consider the ∆PMN such that ∠M = 90°

Note: If we draw a circle with centre O and radius OB or OC, then it will pass through A, B and C. The point O is called circumcentre of the triangle.

Question 2. In a triangle locate a point in its interior which is equidistant from all the sides of the triangle.
Solution:
Let us consider a ∆ABC.

Draw m, the bisector of ∠C.
Let the two bisectors l and m meet at O.
Thus, O is the required point which is equidistant from the sides of ∆ABC.
Note: If we draw OM ⊥BC and draw a circle with O as centre and OM as radius, then the circle will touch the sides of the triangle. Point O is called incentre of the triangle.

Question 3. In a huge park, people are concentrated at three points (see figure)

A: where these are different slides and swings for children.
B: near which a man-made lake is situated.
C: which is near to a large parking and exist.
Where should an ice-cream parlor be set? up so that maximum number of persons can approach it?
[Hint The parlour should be equidistant from A, B and C.]

Question 4. Complete the hexagonal and star shaped Rangolies [see Fig. (i) and (ii)] by filling them with as many equilateral triangles of side 1 cm as you can. Count the number of triangles in each case. Which has more triangles?